Since my Aussie Hero adventure started I have been privileged to meet some wonderful and inspiring people but none more so than Garry and Katrina, the husband and wife team I will introduce you to tonight.  Garry is one of my all-time favourite heroes.

When I am called upon to give a presentation about Aussie Heroes I tell people that there are three reasons that motivated me to start Aussie Heroes officially after sending the first batch of quilts and laundry bags off in 2011. The reason that resonates the most with me these days is that I heard of an Aussie soldier who was being treated in a Sydney Rehabilitation Hospital for serious wounds suffered whilst in Afghanistan.  My friend told me that she commented on the lovely red, white and blue quilt he had on his legs and later his wife told her that the quilt was given to him by an American organisation whilst he was in hospital in Germany. I was so grateful to the Americans for being generous enough to care for our Aussie soldier, but I was so ashamed that there was not an Australian-made quilt for our Aussie Hero.

I had no idea who that soldier was but his story stayed with me.  Two months later I started Aussie Heroes.

"Hi, I recently come across "Aussie Hero Quilts" after a friend posted about it on Facebook. I think it is great what you are doing for our service men and women.


Two and a half years ago, my husband was very seriously wounded in Afghanistan, he spent time in an American military hospital in Germany where he received a beautiful quilt by "Soldier's Angel's". On return to Australia, after being in a coma for a few weeks, he then spent 20 months in hospital. This quilt was definitely much appreciated. It was comforting to my husband that a lady in America made these with love for a soldier. It was also a great talking point at the hospital among visitors, nurses, staff and my husband. I have had a look at your blog and see that you do quilts for the Aussie wounded in Kandahar, they will love that. I did not know of an Australian organisation doing this also.

One thing that we did notice is the quilt my husband received was sized for a bed, he quite often used it with his wheelchair, we found that in the summer months it was way too big and hot because it was folded over many times. He found it comfortable to cover up, because of his injuries. I think for my husband a smaller size quilt would have been perfect. My husband is now home and attends a hospital outpatient rehabilitation program three times a week. He still uses his wheelchair although is not confined to it.

I just thought I'd let you know, that what "Aussie Hero Quilts" are doing is great. I would love to help when I have the time, although at the moment I am a full-time carer for my husband, so am quite busy.

You better believe that I was really touched to receive that message but I still did not connect this couple with the couple that my friend had told me about. Straight away I offered to send a quilt to Katrina so that her husband could road test it as I had, for a while, been wondering if the size we were using was useful for the Wounded Warriors. It needs to be that size for posting to our other heroes but I was really keen to know that we were doing the right thing for the Wounded Heroes. I got a lovely Wounded Warrior Quilt, made by Kaye, in the mail to him as soon as I could.

"Hi Jan-Maree, the quilt arrived, Thank-you. My husband loves it. The day it arrived he used it whilst he sat in his recliner chair. It came at a perfect time, he ended up back in hospital the next day, and it's perfect size for the hospital bed. We have proudly told the story of where the quilt came from to the staff. My husband turns the corner of the quilt to show the printed "Aussie Hero Quilts" label. Thank-you so much. Katrina." 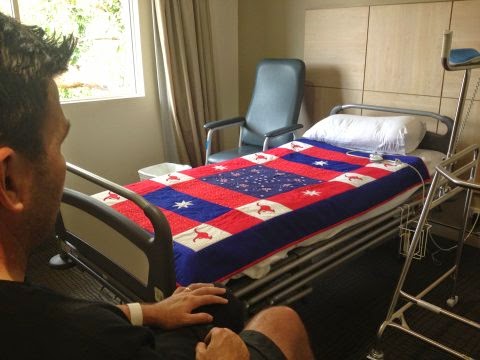 "Hi Jan-Maree, I know you don't expect photos of all your quilts' locations, but I took this picture of the quilt at a different hospital where my husband has gone for surgery. We had a new bunch of nurses that we could explain its origins and the stuff that 'Aussie Hero Quilts' do." 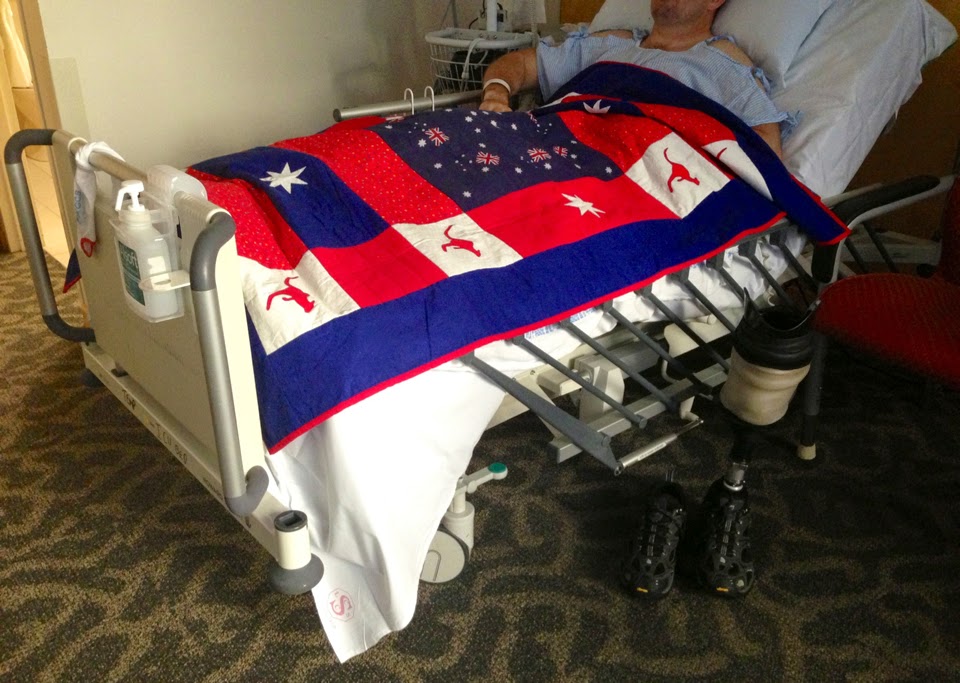 "Also took this one. The quilt is getting around and getting used well. Thankyou." 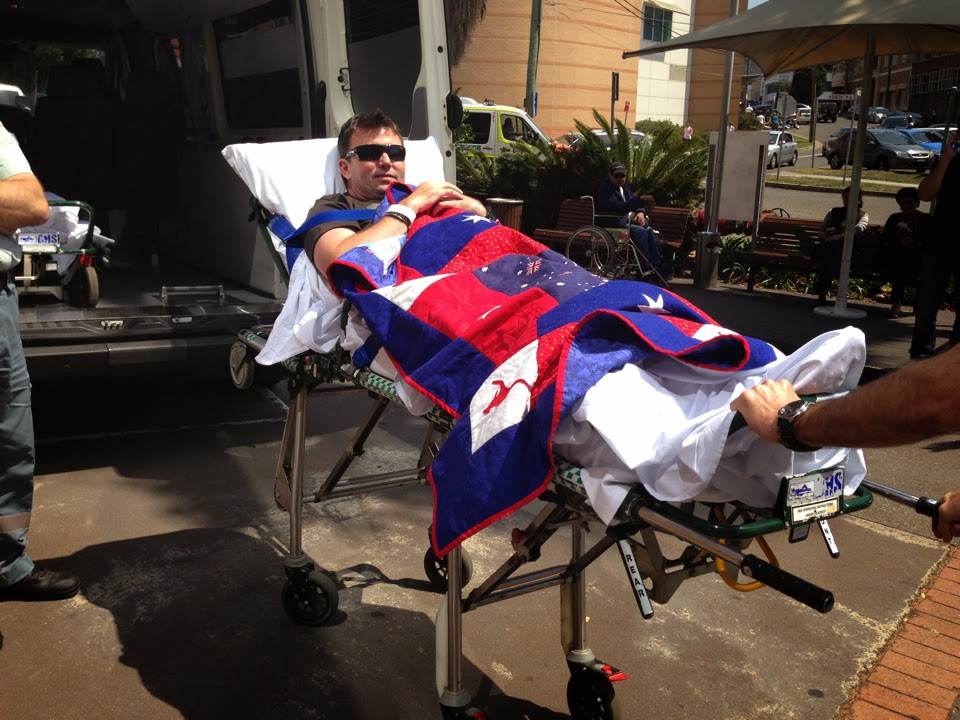 After two Christmases spent in hospital, in 2012 this Hero got to be at home for Christmas.

In March 2013 I went and met this courageous couple at the rehab hospital where Garry was having therapy three times a week.  I had lunch with them in the hospital cafe and Katrina and Garry shared with me a DVD of Garry's progress since he was wounded.  WOW.

Fast forward 18 months or so, and I am now proud to say that Garry and Katrina are friends of mine.  I have seen them a few times now and we keep in touch, mostly via Facebook.  Just before Christmas last year Katrina pulled her sewing machine out of the cupboard and created a laundry bag for our Brisbane Dinner laundry bag challenge.  The results blew me away!  Katrina took a photo of Garry taken whilst he was deployed and turned it into this very special laundry bag.  WOW!! 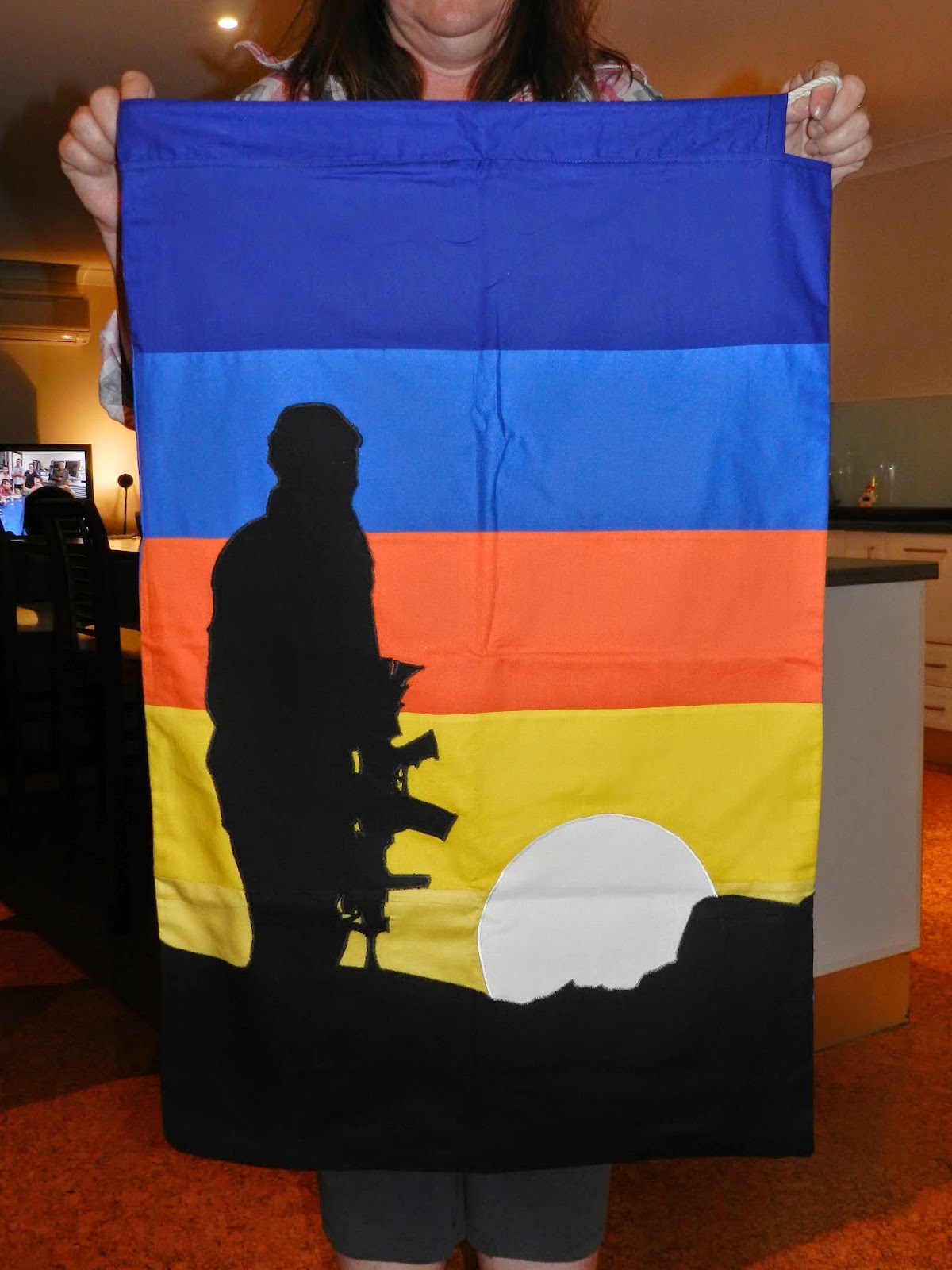 Since then Katrina has sewn more laundry bags and some quilts for Aussie Heroes making good on her promise to get involved and help out and she has even managed to train Louis to contribute as well.  :-) 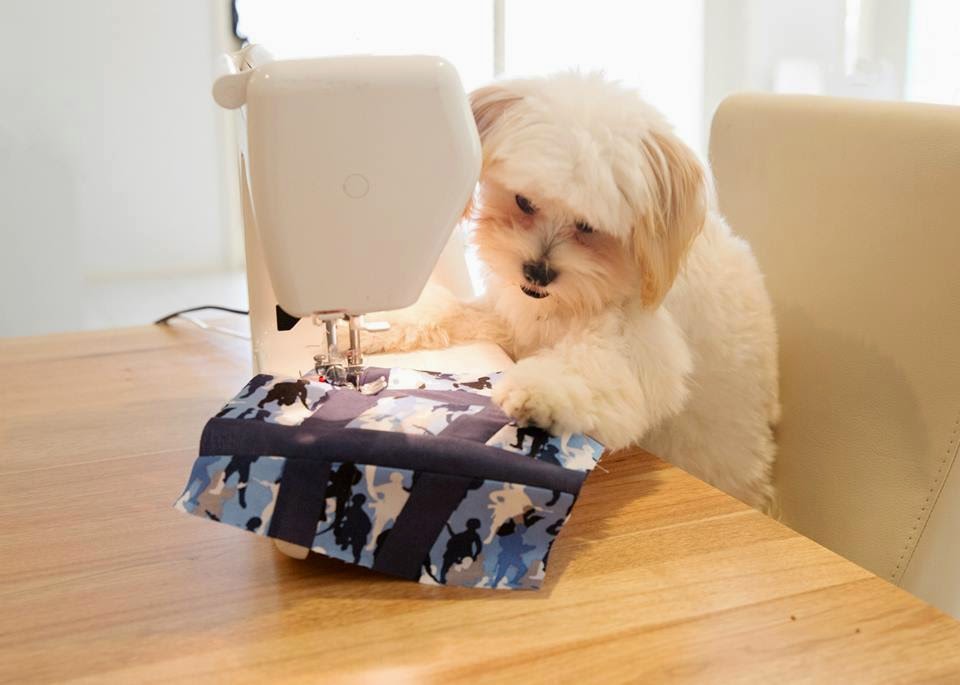 All the while Garry has not been idle either.  He has been working away at his therapy and has come such a long way from the man I met in early 2013 who was just learning to walk again with his prosthetic.


Now at last I am able, with Garry and Katrina's blessing, to tell some of Garry's story......

Garry is a Special Forces soldier from 2 Commando Regiment here in Sydney.  In 2010 he was deployed to Afghanistan for the third time.  On this tour, just a couple of weeks short of coming home, a Blackhawk helicopter that he was travelling in crashed, killing three and wounding seven Australian soldiers.  Garry was lucky to survive. Doctors said that it was his fitness that kept him alive.  He was in a coma for three weeks, suffering a severe traumatic brain injury.  He had a fractured leg, a fractured and dislocated hip, eight fractured ribs, a fractured tailbone, fractured bones in his lower spine, both shoulder blades were fractured, a punctured lung and deep laceration to his back and leg.  While he lay in ICU with a machine breathing for him, he could not speak.

At this point you need to know that prior to his injuries Garry had been a keen triathlete. Garry had been an active member Macarthur Triathlon Club since the year 2000. He competed regularly in club events. In 2008 he successfully completed the Port Macquarie Ironman event. In 2009 he was part of a winning team in the Kurnell Sprint Series. He competed in many triathlon’s representing the Macarthur Triathlon Club. His highlight is representing Australia in the ITU  (International Triathlon Union) Long Distance Triathlon World Championships in Perth in 2009.

Whilst he was still in the coma Katrina would read triathlon magazines to him from cover to cover.


I am going to pause for a minute and pay tribute to Katrina, the sort of wife every soldier, and especially, ever Commando should hope to have.  To me, she epitomises the expression "stand by your man".  In his book "Exit Wounds" Major General John Cantwell, the then Commander of the Middle East Operations wrote of Katrina when he stood with her beside Gary's bed in the hospital in Germany.

"I stand close to his wife, gently asking questions.  Katrina answers with a firm voice and a good understanding of her husband's many injuries; she has already learnt the lexicon of the doctors and nurses. Then we stand together, not speaking, just watching the man in the bed before us.  ..............  In the months ahead I will come to recognise her as a remarkably strong and courageous woman, almost as indomitable as her extraordinary husband."

I feel so privileged to call both of them my friends.

As you can imagine it took a lot of rehabilitation to recover from all the injuries that Garry suffered.   He was in hospital for over a year, and had to learn everything all over again: sitting, standing and walking. He had to accept the fact that his badly broken leg was not healing and needed to be amputated.

He then had to relearn everything all over again without his leg. Meanwhile his traumatic brain injury left him in a confused state, a lot of his memories had to be relearned and memories didn’t always stay with him. He stayed in hospital for 2 years in the end.

As soon as he was home and able to come to watch his club races, he would go down in his wheelchair and inspire the athletes to keep going.

This year he traveled to Forster to watch his team compete in the NSW Club Championship, even though for him, it was tough knowing that just a few years earlier he was able to compete himself.

Well now we get to the exciting news!!!! 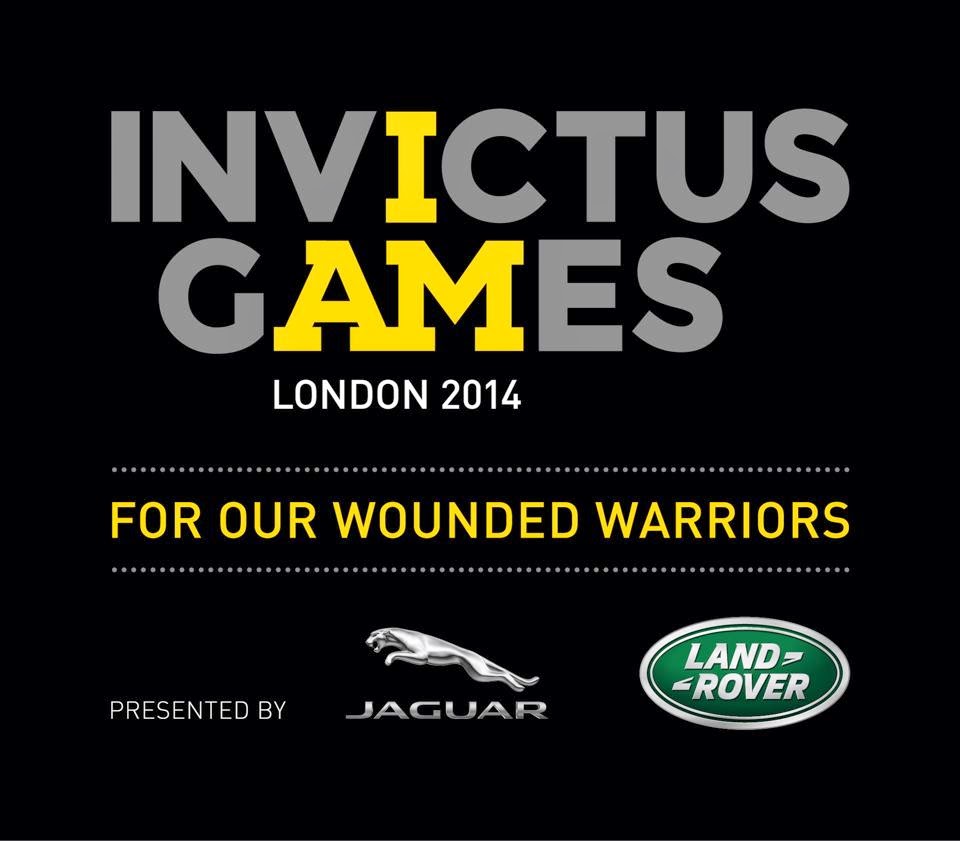 Garry has been selected to represent the Australian Defence Force in the Invictus Games in London in September this year!  His family will be accompanying him and are so looking forward to being able to see Garry's determination and that of the other inspiring competitors as they strive to achieve their goals.  Garry will be competing in swimming, archery and riding. 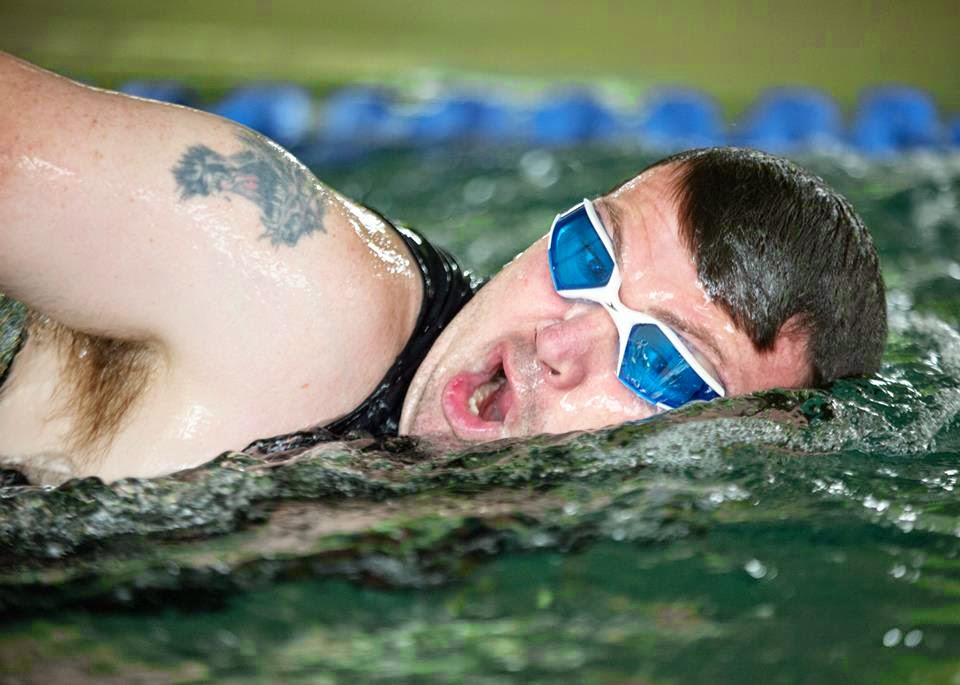 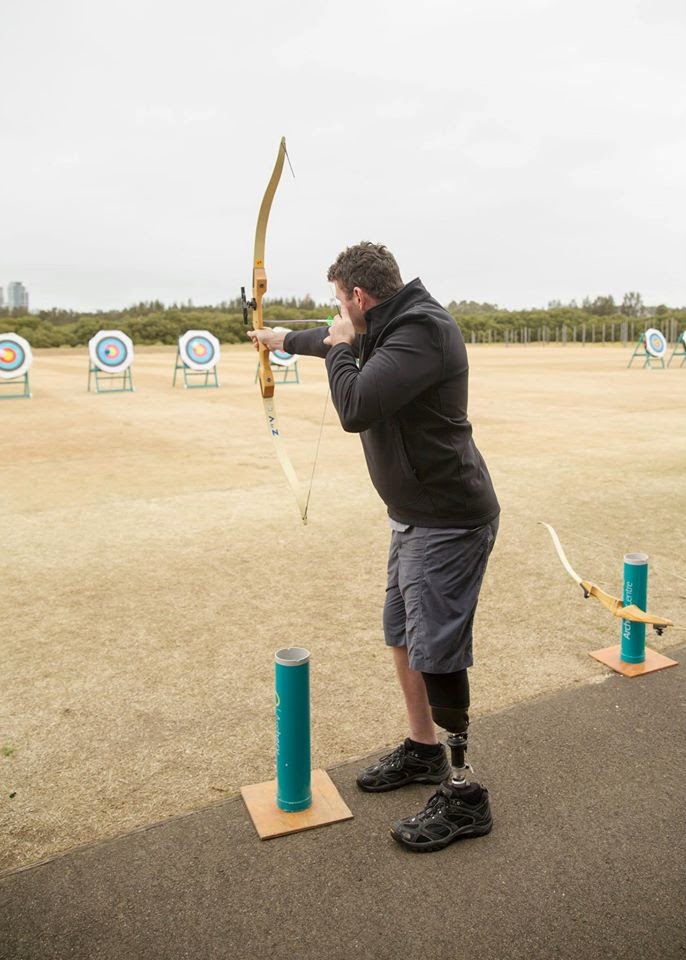 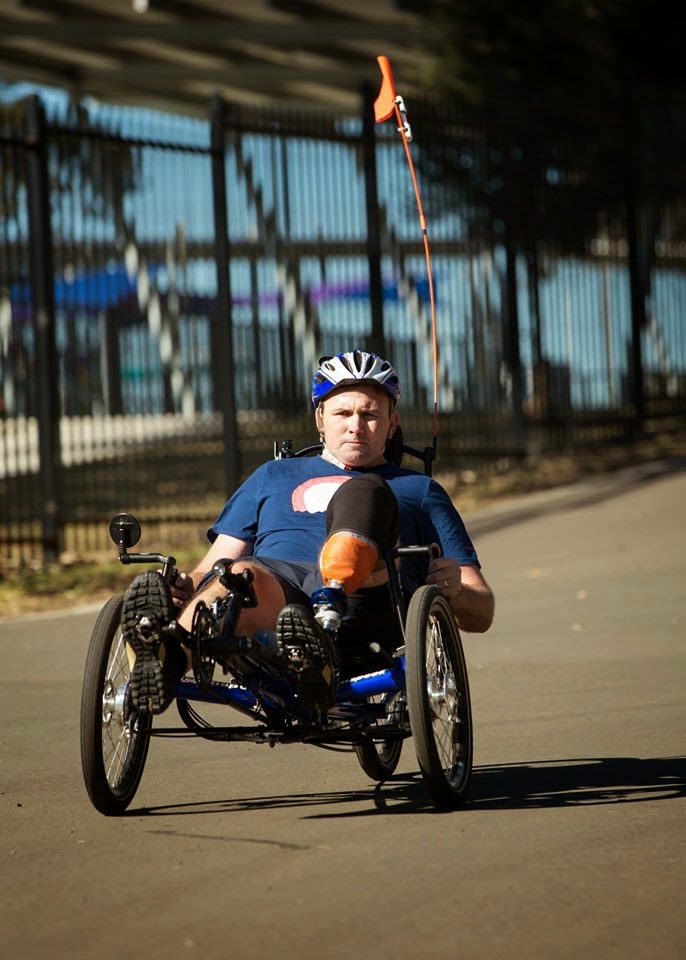 The Invictus Games is an international sporting event for wounded, injured or sick servicemen or women. The event, which is championed by Prince Harry, will use the power of sport to inspire recovery, support rehabilitation and generate a wider understanding and respect for those that serve our country.


For Garry, he now has a whole new thing to focus his rehabilitation towards. It will give him the motivation to improve his skills as they are. It's tough for him not being able to compete in sport like he used to.  Triathlon is a big part of his rehabilitation.  He and his physiotherapist are setting a triathlon as a goal for him, and Katrina tells me that being the type of man he is, Garry will one day achieve that goal.

I know you will all join with me in wishing Garry, and all of our Australian Invictus Team members, a successful and fulfilling trip to London. Stay tuned for updates on how our very own Invictus Warrior goes.