A Brief History of Aussie Hero Quilts (and laundry bags)

There are three main reasons I feel the need to do something to give back to our defence force.  .   I started Aussie Heroes for a number of reasons – I hated the way our Vietnam Veterans were treated.  That can never be allowed to happen again.  I heard of an Aussie soldier given a quilt by the Americans in Germany and was ashamed that there was not an Aussie Quilt for him.  He now has one of ours and I have since met him and his wife a couple of times and they tell me that he uses his quilt all the time.  Finally, I just felt that we, the Aussie public, needed a way to say thank you to our Defence members for their service.

Aussie Heroes has been up and running since January 2012 but it began with me sending quilts and laundry bags, with the help of my quilt group, to one particular soldier and his team in late 2011.

I came across this fellow through his wife's blog and reached out to them to see if there was something I could to make his deployment a bit easier.

He felt a really useful gift would be a laundry bag.  Sounds like such a little thing doesn't it?  Well not so.  You see the serving personnel were all using the same laundry bags an that made it hard to find their own laundry bag in a hurry when they wanted it. Apparently emails go around each day saying “someone picked up my laundry bag”.  This soldeir's wife made her husband a colourful one with large initials and the problem was solved for him.....but what of his men?  So, Laundry Bags it was.

I convinced my quilt group, to come on board and we decided to make 15 very durable laundry bags in time for Christmas!  It was already the third week in October.

As it gets down to -25ºC in in winter we also decided to make quilts.  I designed a very basic strip quilt and we got cutting and sewing and ended up making 24 quilts.  All the parcels were sent off in November 2011.   The laundry bags and 15 of the quilts went to the Warrant Officer and his team and the extra quilts were passed on to others at the Warrant Officer’s discretion.

We received such a heart warming response to the first lot of quilts that we set about sending a few more to friends of those that received the first lot as well as to any other soldiers we heard about.

By the end of December it was obvious to me that there was enough support out there to turn this into an wide proposition.  On January 1st I launched the dedicated blog http://aussieheroquilts.blogspot.com.au
and after much thought and a lot of supportive comments I decided to launch a Facebook page as well.

Aussie Hero Quilts (and Laundry Bags) has continued to grow steadily.  By the end of February 2014 we had sent nearly 2500 quilts and over 3900 laundry bags.

These days quilts and laundry bags are mailed mostly in response to requests we receive from serving members or their loved ones.  I also have other avenues to send items as well.

We have every sort of woman you can imagine, married, single, Mums, Grandmas, wives and mothers of serving members, ex-serving members, wives of Vietnam Vets - you name it, as well as a few men.  Everyone donates their time and materials because they think it is important and appropriate to get behind our serving men and women and say thank you. 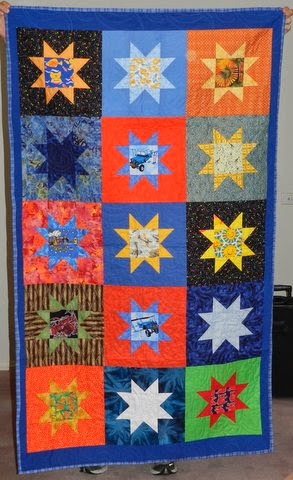 This quilt is made up of Blocks of the Month and was very much a joint effort.