In Honour of Remembrance Day

Today was the 95th Anniversary of Remembrance Day, the day when, all those years ago, the guns on the Western Front fell silent after over four years of war.  The German forces, who had inflicted heavy losses on the Allied armies over the previous four months, were driven back.  In order to secure a peace settlement the Germans called for a suspension of fighting, or an Armistice, in November.   They accepted the allied terms of unconditional surrender.   The guns fell silent at 11am on the 11th of November 1918.

It is hard to comprehend that over 70 million people who were mobilised for war.  Even more unimaginable is the fact that between 9 and 13 million  were killed in the war and up to a third of those who died have no known grave.   The anniversary of the moment the guns were silenced on the Western Front has ever since been a day to remember those who had died in war with the 11th hour of the 11th day of the 11th month being the focal point of the Remembrance Services.

On the first anniversary of the Armistice in 1919 at London’s then new Cenotaph a two minute silence was observed as part of the main commemorative service.  Did you know that the silence was proposed by Australian journalist Edward Honey, who was working in Fleet Street.

The Australian and British governments changed the name to Remembrance Day after the end of the Second World War as Armistice Day was no longer an appropriate title for a day which would commemorate all war dead.

In 1993 in Australia, on the 75th anniversary of the armistice, Remembrance Day the remains of an unknown Australian soldier, exhumed from a First World War military cemetery in France, were ceremonially entombed in the Memorial's Hall of Memory.  Remembrance Day ceremonies were conducted simultaneously in towns and cities all over the country, culminating at the moment of burial at 11 am and coinciding with the traditional two minutes' silence. This ceremony, which touched a chord across the Australian nation, re-established Remembrance Day as a significant day of commemoration.

In 1997, Governor-General Sir William Deane formally declared the 11th of November to be Remembrance Day.  He urged all Australians to observe one minute's silence at 11 am on 11 November each year to remember those who died or suffered for Australia's cause in all wars and armed conflicts.

During the First World War red poppies were among the first plants to grow in the battlefields of northern France and Belgium.  Folklore will tell you that the vivid red of the poppy is drawn from the blood of those who died, their blood soaking the ground.

Eventually the poppy became accepted by allied nations as the flower of Remembrance and was worn on Remembrance Day.  In 1921 one million silk poppies made in French orphanages were imported and sold with the proceeds being shared among three different charities.  The RSL continues to sell poppies to raise funds for its welfare projects.

Poppies adorn the panels of the Memorial's Roll of Honour, placed beside names as a small personal tribute to the memory of a particular person, or to any of the thousands of individuals commemorated there. This practice began at the interment of the Unknown Australian Soldier on 11 November 1993.  As people waited to lay a single flower by his tomb in the Hall of Memory, they had to queue along the cloisters, beside the Roll of Honour. By the end of the day, hundreds of RSL poppies had been pushed into the cracks between the panels bearing the names of the fallen.

This scene has been beautifully immortalised in the quilt made by Lucy Carroll which she is hoping to sell eventually to raise funds for Soldier On the organisation which inspired the quilt and after which it is named. 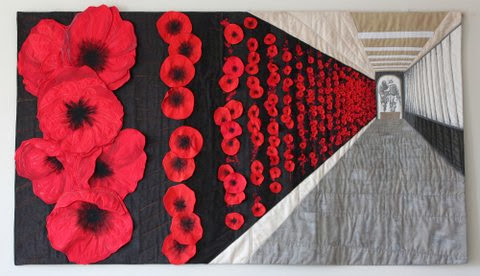 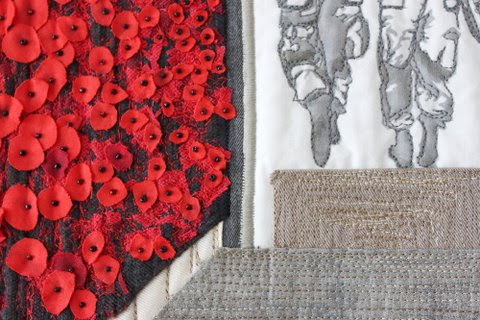 You can see more of Lucy's wonderful work here on her blog and I really suggest you do.

In honour of Remembrance Day Caroline and I decided that we would introduce a new block to Aussie Heroes........a Poppy block.  Instead of Blocks of the Month for November, December and January I thought it might be nice to collect some poppy blocks.  These will be exclusively used for Fallen Warrior Quilts.

These are the poppy blocks that I have made up to show what we are going to be up to for the next three months.  Very easy block to do so I hope everyone will join the fun. 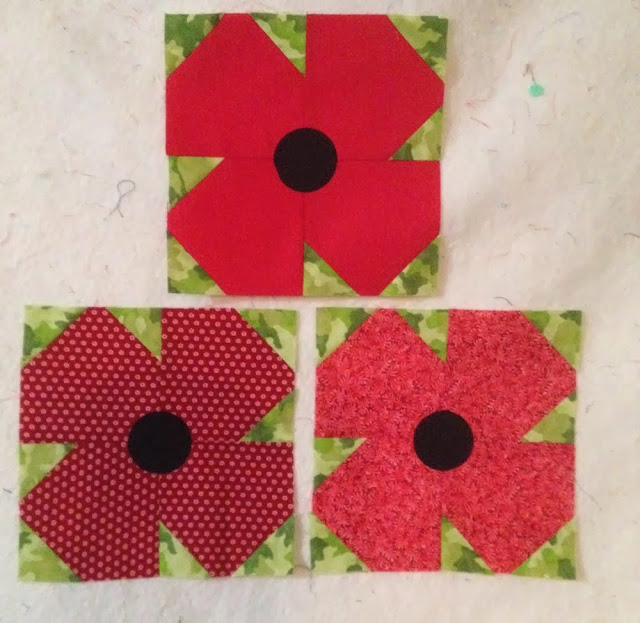 
We found this free pattern on Craftsy here is the link to the free patterns just scroll down to find the "Simple Pansy Block" if you want to download it...Craftsy Free Patterns


To make these blocks you will need the following fabric: 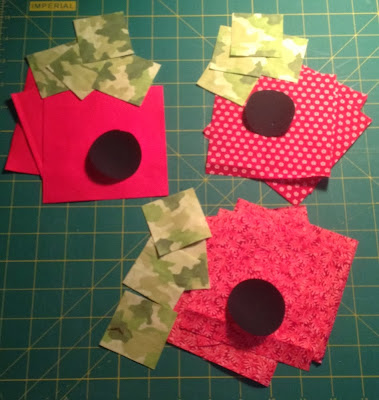 ( I have enough for 3 blocks cut here)
After you have cut your fabric... mark a diagonal sewing line along the back on the green squares. 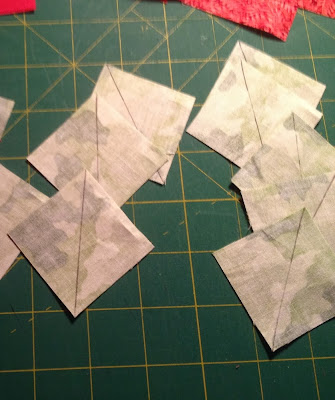 Next pin two green squares to each red square and sew along both diagonal lines. 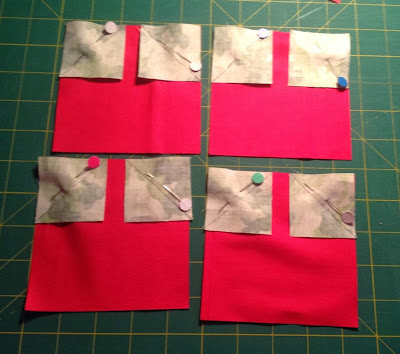 Once you have sewn all eight lines, you can then trim off the excess fabric leaving a 1/4" seam.  After trimming press the green back over so you once again have 4 x 4 1/2" blocks 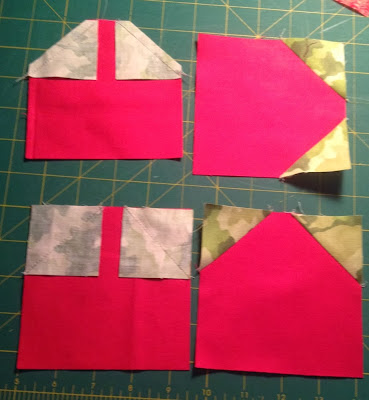 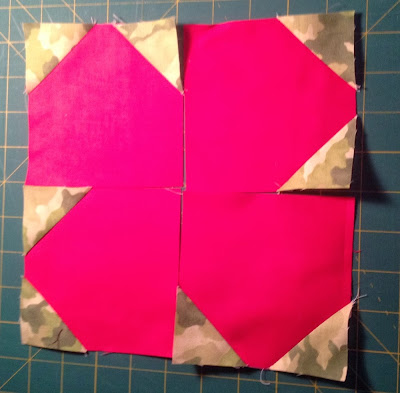 Arrange the 4 blocks in the order they will be sewn and then sew the top two together (Row1), then the bottom two together (Row 2).  Once sewn press the seam on the top row (1) to the right and the bottom row (2) to the left.  Nest the two seams together in the centre and sew the two rows together to complete the block. 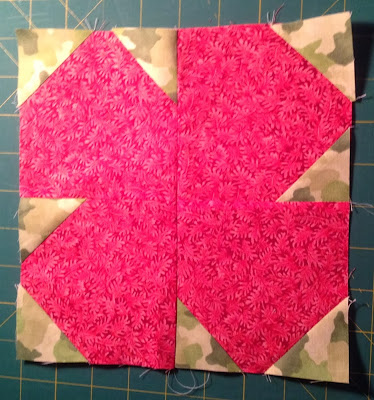 Using visoflex / fusiweb press onto black fabric and cut out a 2" inch circle for the centre.  Iron on and sew the circle to the block with the applique technique of your choice (zig zag, buttonhole, plain stitch).  Now you're done... Easy right. 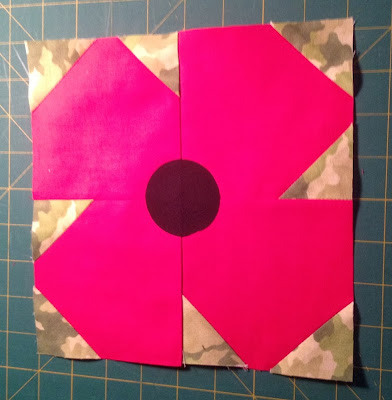 So make as many or as few as you would like but be warned they are a little addictive because they are so cute.  Once complete you will need them to post them to me instead Jan-Maree, her post box is bursting at the seams LOL.