Marg's Eagles and how they flew!

Time to tell another story.
Along time ago (well some time last year and I am too lazy to try and look up exactly when it was) a quilter called Marg took on the challenge of making an Eagles themed laundry bag for a cheerful young lady on Operation Slipper.  Now as usual I can't name this lady but for ease of communication I am going to call her Molly for this post.  This photo has already appeared on the blog and so have some of the others but you can't tell a story without illustrations so bear with me.

Marg's laundry bag was made with her customary attention to details and duly sent off where it was greeted with absolute delight by Molly and much envy from Molly's friends and colleagues, also West Coast Eagles fans. 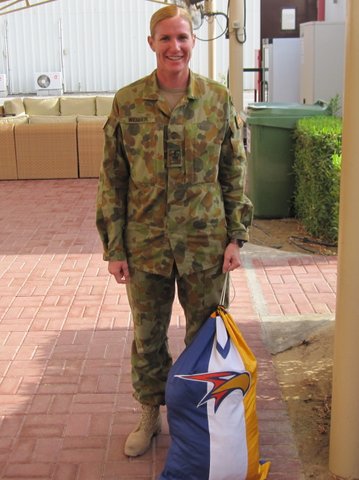 Back came the thank you message and pleas from the other fellows.  Now I told Marg that she was under no obligation to make anymore if she didn't want to and that I would be more than happy to go back to Molly and say it wouldn't be possible, but Marg being Marg said yes.

As you can see by the grins on their faces their new Eagles bags were a big hit.  There was one other bag as well as Molly mentioned that her brother, also in the defence force but in the Navy, was also an avid Eagles fan, so Marg made one for him as well.

Does the story end there? 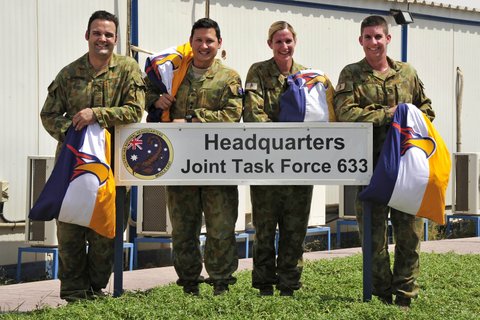 Well, not exacty.  One of these fellows just had to show off his new laundry bag to his fellow Eagles fan and mate serving in another location.  In fact the new fellow was an EMBED.  Now if I have it right EMBEDs are those that are attached to work with forces from other nations - often   fairly isolated from other Aussies.  They do not get care packages with the same frequency as those in Australian camps and a bit of good old Aussie flavour goes a looong way.

Back came another request.  "Hand over your bag mate!"   Of course no one was prepared to part with their bag so we received a begging email .......was there anyway that Marg could possibly, pretty please, make another one for a poor fellow in need of some Aussie-ness.  Once again I did tell Marg that she didn't have to do it - I assured her I would get someone else to make the fellow a laundry bag in Eagles colours - but once again Marg said that she would do it but this time it would be the ABSOLUTE LAST Eagles bag she would make! 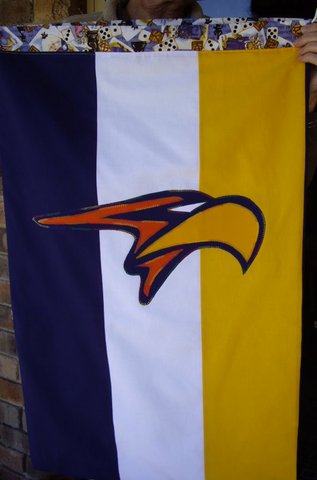 So, you would think, seeing that was the very last Eagles Laundry Bag that Marg swore she would ever make, that would be the end of the story!
Not exacty - you will have to come back tomorrow night to read part two!

And don't anyone ask me - Marg will not make any more Eagles laundry bags!