With the Centenary of ANZAC Day fast approaching there are lots of things coming on to the market to commemorate the day and to remember those who have served in the past and who serve today.

When I hear of something special I will share it with you and tonight's blog post is one of those occasions.

A week ago I met a young lady, called Alana, who came here to do a photo shoot (more details on that to come in the future when I can talk about it) and of course she heard all about Aussie Heroes.  She told me that her mother-in-law had recently published a children's book with a military flavour and that immediately caught my interest.    I asked her to send me some details so that I could promote the book on the blog.

Later than day I received an email from her with her mother's details.  I followed up and had a great email from Belinda Landsberry, the author and illustrator.   Belinda kindly offered to send me a copy of her book so that I could review it for you all.

Alana told me that the character in the book was roughly based on an old teddy they had in their family.  I asked Belinda about it and she explained.....

"The book was inspired by the teddy bear 'Ted' which my husband David brought with him when we first married.

Ted was very old and badly worn and torn, but that didn't diminish David's love for him. Ted had been given to David by his dad, Alf, when David was a young boy, and over the years, despite his appearance, David cherished Ted because he was a symbol of his father's love.

I took a little convincing when Ted arrived in our new home - in fact I admit to judging a book by its cover (or a bear by his fur ) and suggested Ted reside in the furthest cupboard I could find.

Over the years however (we've been married for 32) Ted kept appearing out of nowhere and turning up in highly visible spots around the house. So as a writer I started thinking about this battered, but beloved old bear, and his mysterious past. After all, he had come to David pre-loved because David's dad, Alf, had found Ted in a gutter. Alf had been conscripted during the Second World War. Could Ted, in fact, have gone to war?

And the idea behind Anzac Ted was born.

Anzac Ted took very little time to write - in fact it was one of those dream stories that almost write themselves; I like to think the ANZACs had a hand in that.

The illustrations were meticulously researched and took six months. I sought permission to base several illustrations on photographs taken during WW1 by renowned photographers such as Ernest Brooks." 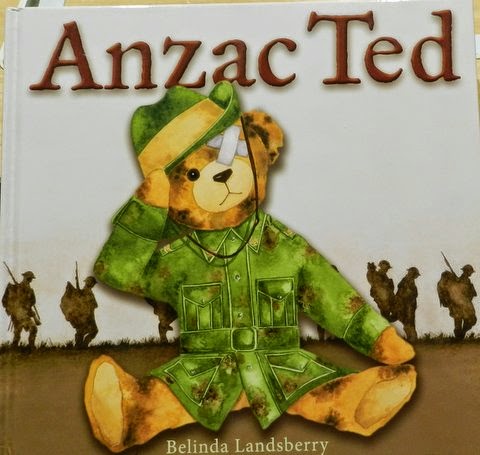 Now I will unashamedly admit that I love childrens books and my boys, when they were little, had a huge library.  Nowadays my boys are 18 years old and way too cool to read much so I take any opportunity I can to buy books for friends' children.  This book is going to be top of my list.

According to her bio on the ANZAC Ted website, Belinda has been writing and illustrating children's books for a number of years but ANZAC Ted is her first to be published.
What I did not know till I turned the pages was that the story was written in rhyme, another absolute winner for me. Exposing children to poetry in story form at a young age is a wonderful thing.

The story begins in the present day and explains that Ted is somewhat battered and in the eyes of many, unattractive.   It is obvious though, that Ted is dearly loved by his family.  The story moves from Ted at home, to Ted at school, Ted at war in 1914 and back home again in present day.  Belinda has used sepia tones to illustrate Ted's journey back in time. 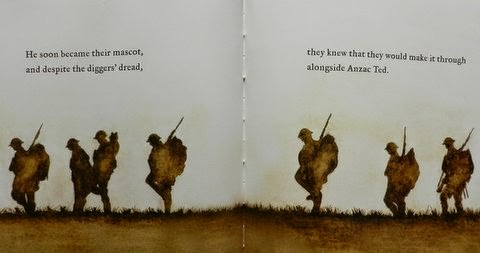 Belinda has taken a cherished member of her family and woven a wonderful ANZAC story, of mateship, courage and unity around him.  It is a beautiful lesson to children not to judge a book by its cover (or that bear by its fur).  The story reminds us that many of our diggers enlisted as barely more than boys.   Ted became to them a symbol of peace and hope and home........ a symbol of home.......not unlike our quilts and laundry bags perhaps.

(sorry my photo quality is not great!) 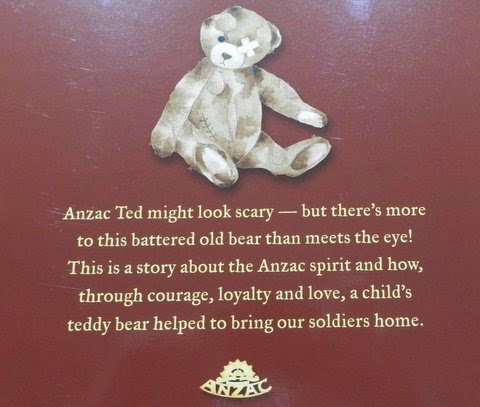 Personally I think this is a must for every young child's home library and if Mum or Dad are wearing a uniform, or Grandma or Grandpa served, then doubly so.
This should also be in every Primary School Library and of course the Australian War Memorial should be selling it.
There is no way I can part with the copy that Belinda sent me (and not just because she signed it with a touching inscription) so I have ordered a couple of copies to send to friends for their children because they just have to have this book.

Anzac Ted is available from all good bookshops and from the publisher via the website: www.anzacted.com

(The publisher is sometimes quicker to post it out than bookshops are to order it in if its not in stock.)

I hope you buy a copy, and if you do, I hope you will let me (and Belinda) know what you think of it.  I reckon you (and your little one) will love it!

Till next time...............keep spreading the word and reading to your kids while they are still young enough to let you.