A quilt for Matthew

Saturday marked the tenth anniversary of the first Australian soldiers injured in Iraq.   You can read the whole story here but here is a small section that I have copied from the source.

Australian troops suffered their first casualties in Iraq today when three soldiers were injured in a massive car bomb attack on their military convoy in Baghdad.

In the first direct attack on Australia's defence forces in Iraq, a car bomb was set off as a convoy of three Australian vehicles drove by on a routine patrol 350 metres from the Australian embassy.

The three Australians were not seriously hurt, but three Iraqi bystanders were killed and several others, including young children, were wounded in the attack which occurred at 8am local time (1500 AEST).

One of the Australians received facial injuries, another was concussed, and the third was treated for minor abrasions and was released, the Australian Defence Force (ADF) said.

One of the three men injured that day was Matthew Millhouse whose story I have shared before on Facebook but I am not sure how much has been shared on the blog so to catch you all up........Matthew received a concussion but once he came home it was clear that not all was as it should be.  To cut a long story short, over a period of time it was determined that the brain injury that Matthew sustained has resulted in him being diagnosed with Early Onset Dementia.

I first became aware of Matthew's story when I caught up with one of our recipients in Wagga earlier this year. Whilst in town to attend a March Out I made time to catch up over lunch with Sam and Melissa.  Matthew was Sam's driver in Iraq.  By then Matt's condition had deteriorated to the point where, in his mid-thirties, he had to move to an Aged Care Residence so that he could receive the care that he needed.  You can imagine the impact this has had on his family, his gorgeous wife, Terese and his little girl, not to mention his extended family.

Sam and Melissa wanted to know if it were possible to have a quilt made for Matthew.  There was no other answer than yes of course.  Eventually I decided that the best thing to do would be to make Matt a memory quilt containing photos of his family and friends.  As Matt served with 2CAV we also included the 2CAV Badge and a photo of Courage, their eagle mascot.

We let Terese in on the secret and she sent me a batch of suitable photos to use.  I wanted to have captions underneath each of the photos but needed help to do that and thankfully Katrina (our Wounded Warrior's wife) was able to help me.  Once the photos were sorted they were sent up to Jenny and Gale in Queensland.  Jenny and Gale are a dynamic duo and in no time the quilt top was assembled.  The colours were chosen to be a blend of Matthew and Terese's favourite colours.  As you can see this quilt is bigger than our normal Aussie Hero Quilts to make it easier to display more photos. 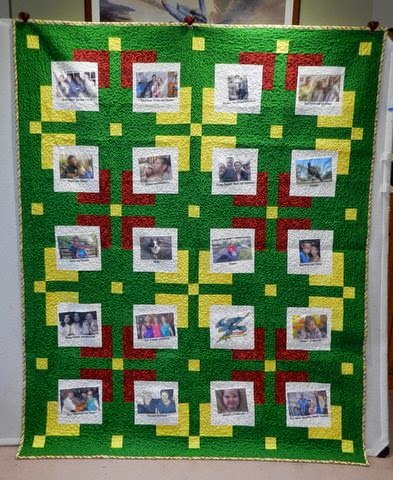 As the anniversary of the day approached Melissa told me that there was to be a reception at with the Governor General on Saturday, the tenth anniversary of the attack, to which all those involved would be invited. Melissa wondered if it would be possible for me to meet up with them after the reception to present the quilt in person to Matthew.

Finally the big day arrived and I headed in to the city.  I had offered to look after Melissa and Sam's two gorgeous little munchkins whilst they were hobnobbing it with the Governor General and everyone else.  I have to show a photo of them because they were so well behaved and are so cute! 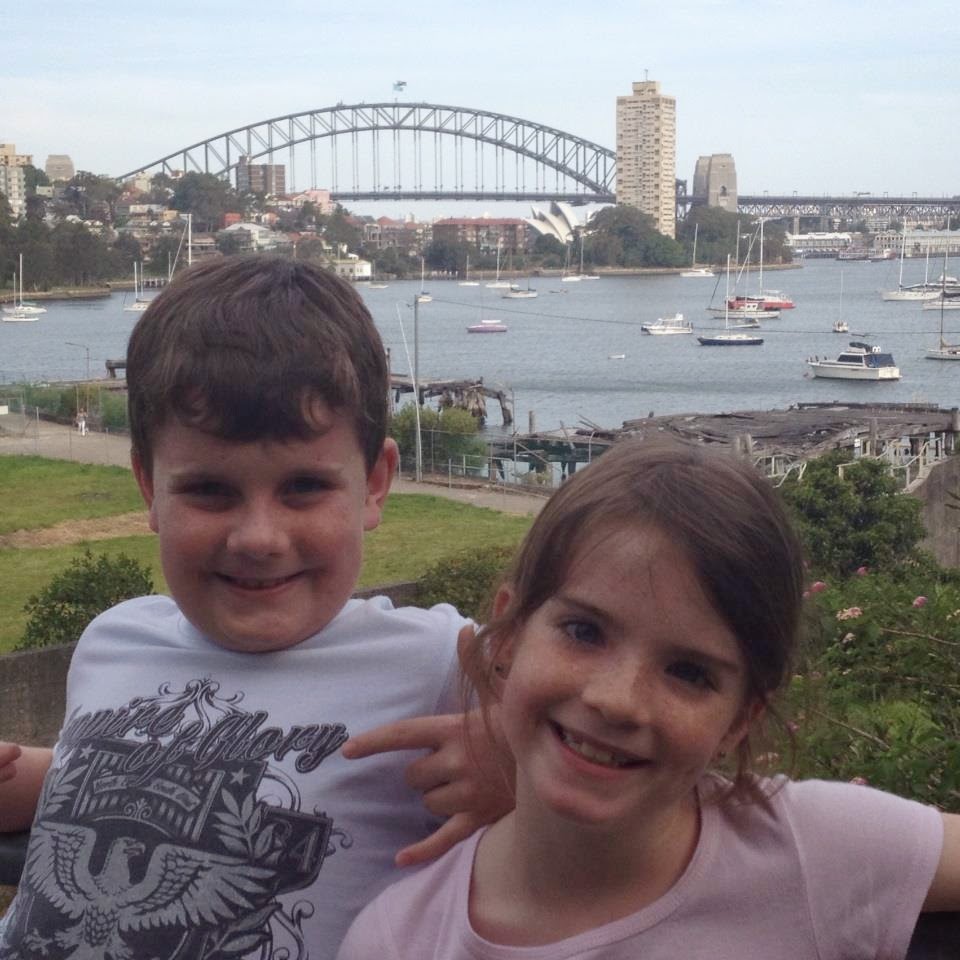 Sam and Melissa headed off looking very smart.  The weather was perfect for it!

I have to give the Governor General credit for arriving home that morning from visiting the troops in the Middle East, hosting this group and then, apparently, he had a lunch to attend, an afternoon function and was hoping to catch up with his family for dinner that night.   I wonder if he got to put his feet up on Sunday ... somehow I think not.

Sam helping me to show Matthew his quilt as we presented it. 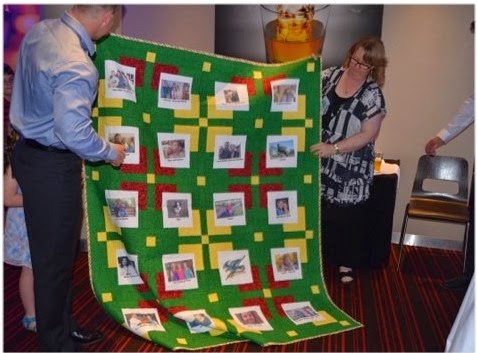 After the reception everyone adjourned to a function room at the Kirribilli Club for lunch.  Finally it was time to present the quilt to Matt.  He and Terese were more than happy to pose with it for a picture. 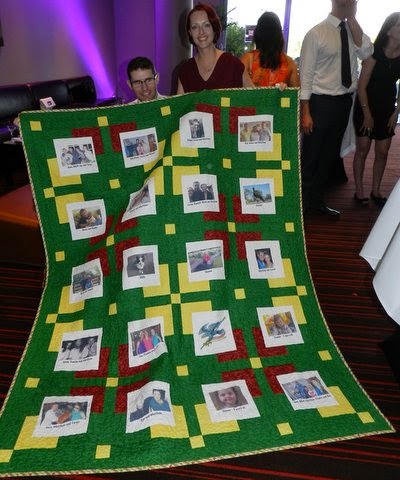 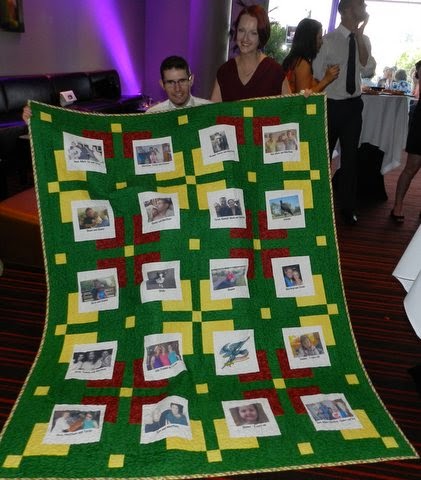 Some of the fellows who were in Iraq with Matt are still and some are out but I felt that we needed to give them a little something as well to say thank you for their service.  Joan helped me out and I took along a tea towel laundry bag for each of them.  I did not have enough time to get all the bags personalised for each fellow unfortunately but they did not seem to mind.  A few of them were happy to post for a photo with theirs. This fellow was particularly delighted as he got married on Magnetic Island so his bag could not have been more appropriate for him. 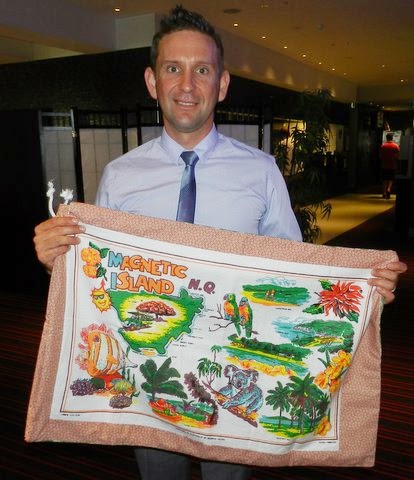 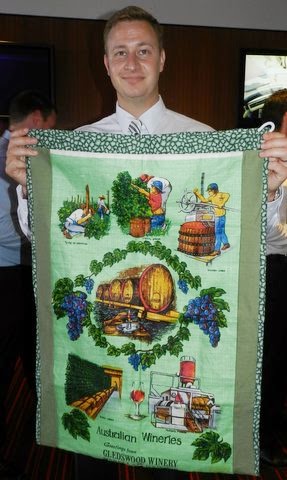 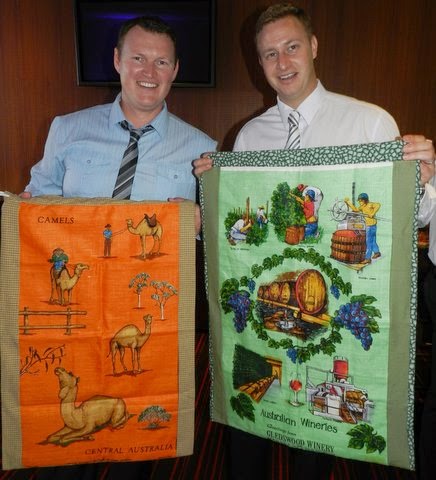 I knew that Matt's mum was coming along on the trip to Sydney to assist with Matthew where necessary and I wanted to give her a little something to recognise the sacrifice that Matt's service has asked of her so I gave her one of our girly laundry bags, also made by Joan.  It was very gratefully received.  Thanks for making the laundry bags Joan - they all looked marvelous as usual.

When you join the services you do so for any one of a number of reasons.  Those who enlist usually do not see themselves as doing anything special but I believe that they are. Ten years ago Matthew would have been in his mid twenties.  Ten years on and his health has been severely affected and it has impacted all those who care for him.  A quilt does not seem much in return but at least it is a sign to Matthew and his family that there are people out here who genuinely care and for whom his service will always count.