Last week I had the privilege of presenting a quilt to the Fleet Command Warrant Officer, Warrant Officer Stephen Downey,  who will be leaving the Navy early next month after a long and distinguished career. 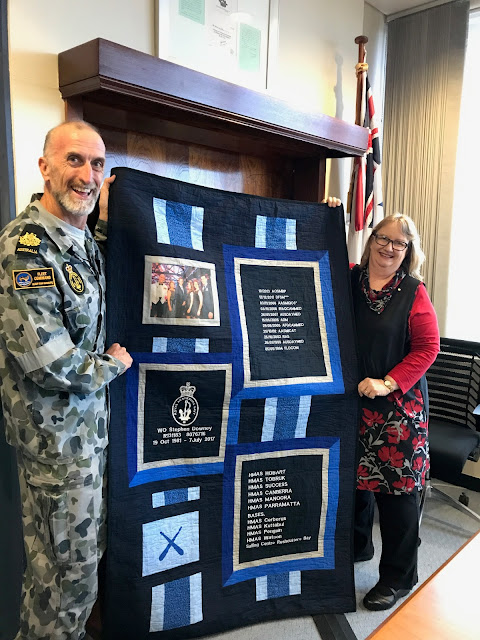 The quilt features the honours and awards Stephen has received, the shore establishments and sea postings throughout his career, the crossed paddles which symbolise his early days in the Navy, the RAN crest and a cherished family photo.

This quilt top was made by Lynn F, with embroideries by Cheri W.  Keryn then completed the quilt with a quilting pattern called "Calm Waters".  What could be more appropriate?

Stephen had not been expecting the quilt but knew something was up as soon
as he saw I was there for the afternoon tea.   The Fleet Commander presented
Stephen with a fourth clasp to one of his medals and then handed over to me.
I looked at Stephen and he just said.. "I know what you do."

After a few words, I unfurled the quilt so that Stephen could see it.  It was an emotional moment in a room full of anticipation, and Stephen was momentarily lost for words and became choked up .. must have been a bit of dust in the air as well...

After he had had a chance to soak in the details on his quilt, we posed for some photos and then Stephen lay the quilt on the table and said a few words.  It was obvious as he related to each of the elements on the quilt, that we had hit the mark with what had been included.  This was a precious moment for me and I really wished all of you could have been there to see how deeply this quilt went straight to the heart of this sailor's career.

I don't normally share details like this, but I do so tonight with Stephen's blessing.  It is the only way I can bring you into the room with me when I am privileged to present these quilts on your behalf. 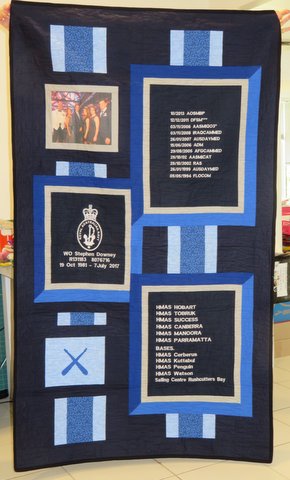 Til next time...... keep spreading the word and happy stitching!