Morning Tea and JOC and my visit to Canberra.......

Last week I headed down to Canberra on Wednesday.  My first stop was Campbell Park Offices where I delivered one of the Reading Room Quilts to Chaplain Mark Willis.   The Chief of the Defence Force (CDF) was scheduled to present an Aussie Hero Quilt the next day and I thought he might like to see some more of our work.

I moved on to my next stop as I had some very special cargo in the back of my car which I could not wait to deliver....

As many of you know, we have one of our quilters on deployment at the moment.  When not sewing for us, she doubles as a serving member.  In collaboration with Gary Pearse (of Wallaby fame) a jersey had been signed by the Governor General and the Governor of NSW, prior to our quilter's departure for deployment.  She left me with the task of getting the signatures of the 4 living Victoria Cross recipients.... I think she waited til she was overseas to pass that detail on to me.

Thankfully, with the help of friends like Garry and Katrina (our wounded warrior and his wife) and another recipient, I managed to arrange for Ben Roberts-Smith VC, Daniel Keighran VC and Mark Donaldson VC to sign the jersey and then with Soldier On's assistance Keith Payne VC signed as well.  Finally it was sent to the wonderful girls from Lone Pine Medals who not only framed it beautifully, but also delivered it safely to me in time for me to deliver it to Canberra.

Given the amount I am hearing some people are happy to pay for this I was REALLY glad to get it out of my home and down to Canberra, delivering it safely into the hands of the team from Soldier On. It will now be one of the live auction items sold on the night of the Soldier On Ball on 26 August this year.   I will be there and I am very much looking forward to seeing how much it raises. 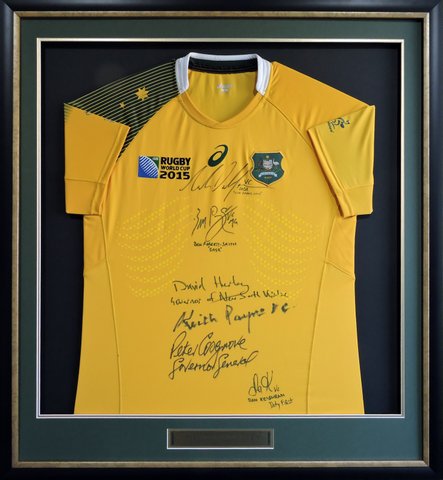 On hearing I would be attending a morning tea at HQ Joint Ops Command the following day, Soldier On gave me enough of their travel mugs to give to all the Aussie Hero members who attended. 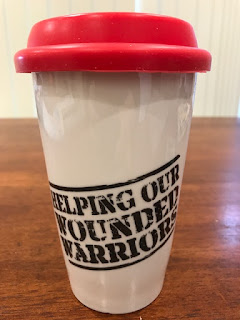 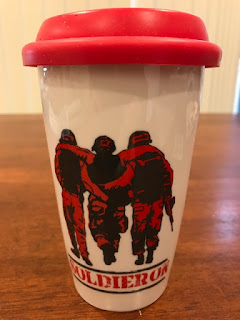 NICE!!  Thanks so much Soldier On.

On Wednesday night I night managed to catch up with some friends for dinner.  It was a bit of an Air Traffic Controller's catch up, as well as a gathering of Quilters. At the table of nine there were four quilters and four air traffickers and me.  I could say that I had a foot in each camp.

At 9am on Thursday morning CDF, in the company of Chaplain Willis, presented one of our Aussie Hero Quilts to a recipient who had worked for him in the past.   I would have loved to be present but there was no way I could be at Russell Offices at 9am and then make it across to Joint Operations Command for the 10am morning tea.   Katie L, one of our quilters who was connected to the recipient, was able to be represent us though.  Chaplain Willis showed CDF the Reading Room Quilt and I am told that he was very taken with it, asking the chaplain to show it to everyone else who was there.

Those of you who had a hand in the making of both the Reading Room Quilts should be very proud of yourselves as the quilts came up beautifully. I was going to wait until the quilts had arrived in situ, so as not to spoil the surprise for those in location but I don't think they will really mind if I share the photos here.

These quilts will be used in a room where the troops can go to read stories to their children, either via skype or on video to help maintain the invaluable contact with home whilst they are overseas.  We were asked to provide a quilt that could hang behind them as a backdrop to make the environment more family friendly.  Fabric from the Navy, Army and Air Force camouflage uniforms was used for the lettering. 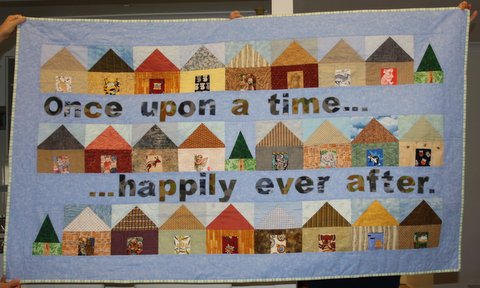 At 10am approximately 25 Aussie Hero Friends converged on Headquarters Joint Operations Command for morning tea with the staff.   Vice Admiral Johnson, Commander Joint Ops, (pictured below)  welcomed us and thanked all of us for what we do for those members who are deployed, as well as for those others we look after.

Hanging on the wall in the Canteen is the quilt I presented last time I was in Canberra which was put together by Sandy Corry from Coffs Harbour, using all the blocks that were decorated by the children from Wagga Christian College.     You might be pleased to know that no sooner was the quilt up on the wall than I received a phone call and a message from two of our recipients, saying how nice it was to see our work in their work places.  :-) 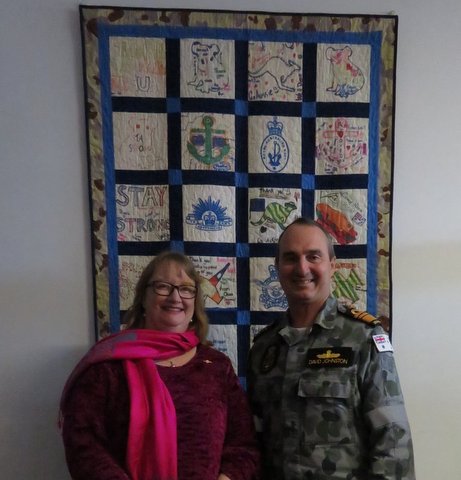 Lynn was lucky enough to meet up with one of the recipients of one of the Mystery Quilts we have made over the years.  He is very proud of his Aussie Hero Quilt and has told me that he loves it and tells everyone about it.  :-) 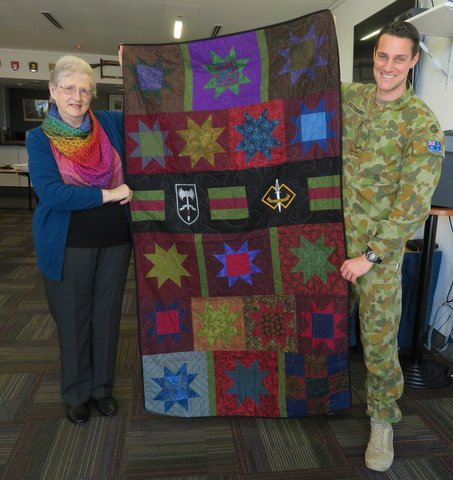 Some of the group had snuck off a bit early before we had a chance to take this photo but this is a good portion of those who were able to make it. 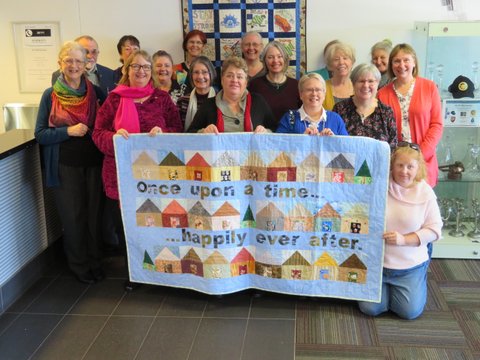 After the morning tea I headed over to meet with Mrs Lee Leahy, wife of retired LTGEN Peter Leahy (ex-Chief of Army for those who don't know).  Lee and I have met a couple of times before.  Last time we met, Lee had offered to make a quilt for us as she had had some material donated and felt Aussie Heroes would be a good use for it.   There is a lovely story behind the fabric in this quilt but you will have to wait til I have all the details to share it with you.

Regardless of the story, this is a gorgeous quilt and it is just a shame that this rainy weather we are having has not enabled me to take it outside and get a photo in good light.  This photo makes the colours look much duller than they are in real life.  Lee pieced and quilted it herself on her domestic sewing machine, picking out all the details in the panel with the peacock, stitching around all the stems and flowers. It would have taken her hours and has resulted in a really lovely quilt. 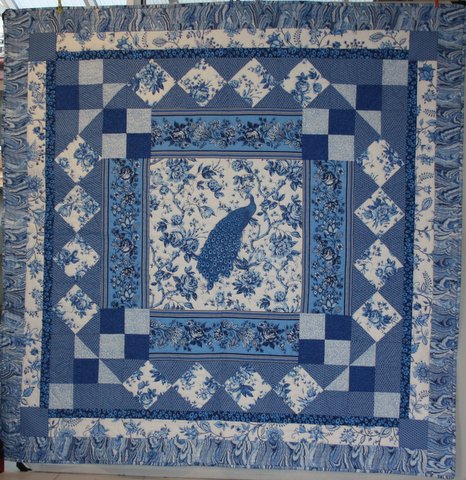 Lee has said she is happy for me to use it as I see fit, whether for fund raising or as a gift to a recipient where there is a special need.  I won't be rushing into deciding what is to happen to it, the right purpose will present itself.
A huge thank you to Mrs Leahy for thinking of us.

On Thursday night I collected my friend, and fellow Aussie Hero Quilter, Alison, and attended the Canberra Quilters Meeting. I had not realised it was on til Helen Godden mentioned it the day before and it seemed too good an opportunity to spend some time with some like minded people.

They had a great speaker, whose name sadly escapes me.  Sorry but no photos either. I was in quilter mode, not writing blogs for AHQ mode.   The speaker basically gave a talk about her quilting history.   She has made some amazing, and I mean AMAZING, quilts and it was lovely to hear her speak about how her quilting journey had progressed.

Helen Godden and her lovely mum, Pat, got up and showed their latest Aussie Hero Quilt.. can't share a photo as I know the recipient reads this blog... but it is awesome.

I showed some of our quilts... and Alison had two awesome quilts, one completed and one underway, that she showed.   For any of you who live in Canberra, the Canberra Quilters are a great group and have lots and lots to offer.  I will be paying more attention to their schedules now that my husband is working permanently in Canberra and now that I will be down there more often.

One Friday morning I headed over to ADFA to discuss the venue for our Annual Dinner and from there I moved on to meet up with a couple I had not met before for lunch.   After lunch I surprised the gentleman with a laundry bag made by Bridget... caught him completely by surprise much to his wife's delight.  :-) 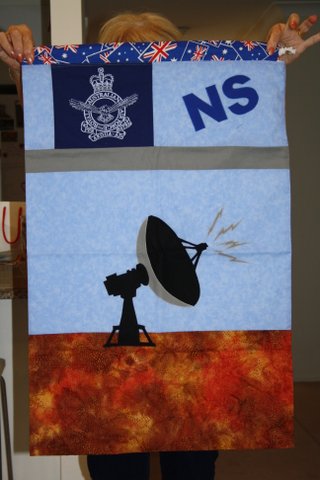 That same couple are now helping me to organise the dinner which is awesome as I cannot do it by myself.

After lunch I whizzed out to HMAS Harman to have a quick cuppa and a catch up with the Commanding Officer, the Executive Officer and the Ship's Warrant Officer.  The CO received a quilt and a laundry bag whilst she was deployed a couple of years ago. The XO received a quilt while he was deployed in South Sudan (I think) and the SWO received a laundry bag last year as a thank you for helping us to arrange our dinner at HMAS Harman.

Next stop was back to Campbell to meet up with this young lady.  For reasons beyond her control she missed out on receiving a quilt whilst she was deployed so had to receive it back on Aussie soil.   Maree J made the quilt and with lucky timing I was able to deliver it in person on Friday afternoon. She was delighted with the colours as they match perfectly with her decor at home.   As a defence civilian, who deployed alongside uniformed personnel, all doing the same job, she felt receiving an Aussie Hero Quilt made her feel included.... and that is just how she should feel. 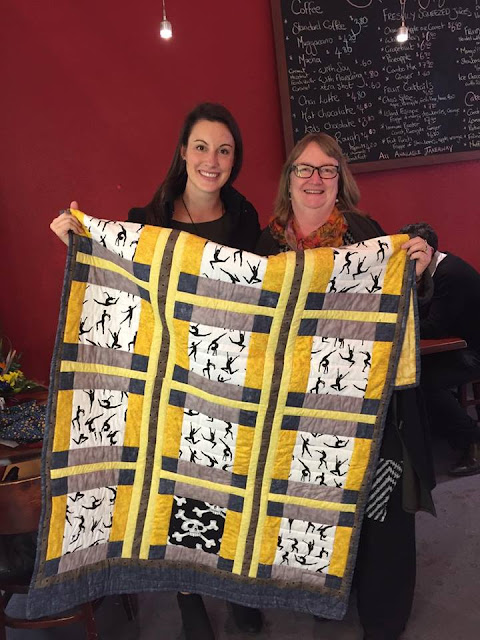 That was the end of the Aussie Hero week for me but I stayed down in Canberra for the weekend to spend time with my husband. We had dinner with his new colleagues and a visiting professor on the Friday night, went house hunting on the Saturday, caught up with another recipient (who has become a friend) and his wife on Saturday night and had dinner with a young friend who is at ADFA on Sunday night. I then drove home early Monday.   There are going to be regular long weekends in Canberra in my schedule now that my husband is working down there permanently and I don't mind one bit as, despite the frosty car in the morning, and the chill wind in winter, I really do love the place and don't need much excuse to visit. Of course, it does not hurt that there are so many really lovely people for me to catch up with as well.

Till next time..... keep spreading the word and happy stitching!